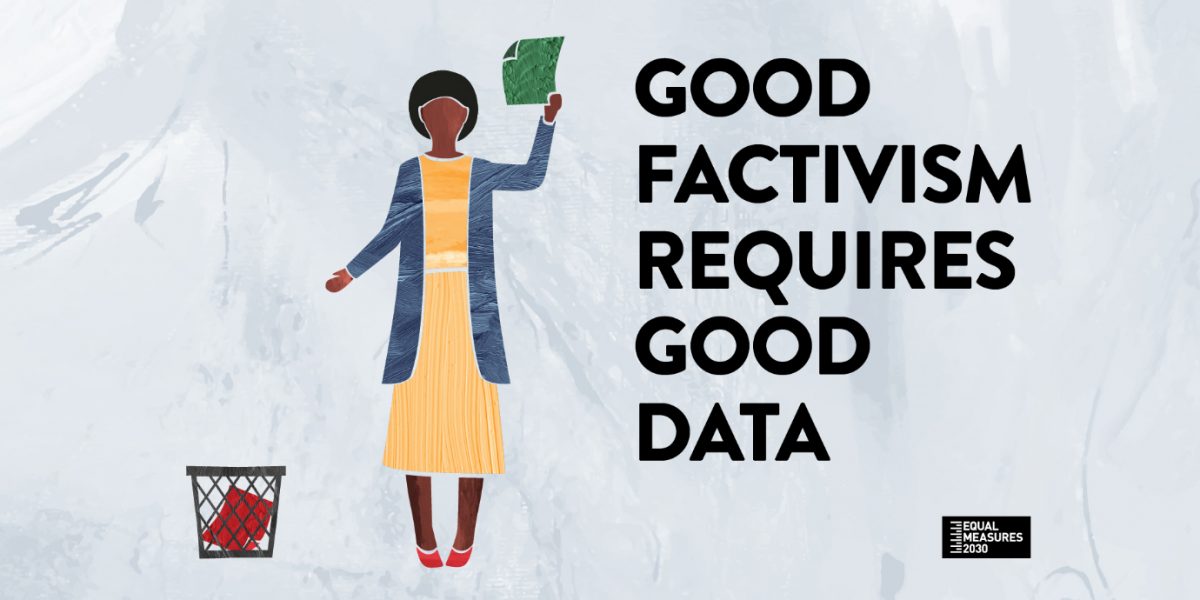 It’s the first Global Goals Day of Factivism; a chance to embrace the facts that help us understand the state of our world as it is today. With Equal Measures 2030’s (EM2030) mission of connecting data and evidence with advocacy and action on gender equality, Factivism is why we exist.

Good Factivism requires good data, and this includes timely data. The partners behind today’s day of action (including TRENDS, GPSDD and Project Everyone) have shared an important up to date fact about the state of gender equality to remind us that men dominate positions of political power, holding 75% of Parliamentary seats globally. This fact resonates with the findings of EM2030’s SDG Gender Index: no country has yet reached gender equality and half of countries — home to 2.1 billion girls and women — won’t meet a set of the most important gender equality targets by 2030 if the current pace continues.

Lack of progress on gender equality threatens the whole of the Global Goals agenda: 22% of the indicators for the 17 SDGs are gender specific, and many more of the SDG indicators aren’t gender specific but should be in order to reflect the uneven progress on key issues for girls and women.

But up-to-date data is particularly hard to come by for gender equality. EM2030 knows this first-hand. In building our SDG Gender Index — the most comprehensive tool available to monitor gender equality aligned to the SDGs — we combed gender data sources across the world and across sectors to compile data measuring 51 gender issues across 129 countries.

Despite the massive data compilation effort, we undertook with our global, cross-sector partnership, our Index (like others) is heavily reliant on population Census, household survey and administrative data. But censuses are conducted only every ten years, internationally standardized household-level surveys tend to be updated every 3–5 years, and administrative data (data generated through birth registration, education and health systems, for example) are collected on an ongoing basis but only compiled and reported several years later.

The COVID-19 pandemic has increased the pressure for timely data on gender equality. Many groups, including EM2030 and its partners like the Bill & Melinda Gates Foundation and FEMNET, have raised the alarm that COVID-19 could set gender equality back by decades. But at a global level, there is insufficient up-to-date data to systematically prove this point. Even worse, there is a real risk that COVID-19 leads to even less timely gender data, with lockdowns and strained public budgets threatening data gathering efforts.

COVID-19 has exacerbated the pressures, but the need for more up to date gender data is not new. Lack of timely gender data was raised by policymakers and gender equality advocates alike in stakeholder surveys conducted by EM2030 in 2017 and 2018.

In 2018, we worked with Ipsos to survey 625 gender equality advocates around the world. Just 19% of gender advocates considered gender data “up to date.” 86% of advocates described gender data as “somewhat” or “mostly” incomplete. 9 in 10 advocates attributed gender data gaps to governments not prioritizing the collection of data about issues affecting women and girls.

On the inaugural Global Goals Day of Factivism we need to celebrate the power of facts to capture attention, expose injustice, and drive accountability. But we must also recognize that when it comes to gender equality, up to date data is hard to come by. These gender data gaps must be filled, especially through cross sector and systemic investments in national statistics systems . Data2X estimates that the gap in financing for gender data systems in lower-income countries is between $170M-$240M a year. With COVID-19 in mind, we also need to prioritize real-time monitoring of critical gender issues that we know respond quickly to shocks, such as income, access to education and health services, rates of violence and unpaid care burden.We know that setbacks in progress on gender equality threaten the whole of the 2030 agenda, but we’re “flying blind” without sufficient data to understand the real-time global impact of shocks like COVID-19 on women and girls. Even before COVID-19, more than a third of countries were moving slowly — or even in the wrong direction — on key gender issues. To ensure Factivists have what they need to keep gender equality progress on track, their demands for more timely gender data must be met.